Feedback: 25 / 0 / 0
Looking to get a pvs4, wondering what the going price should be for one of these units. I understand I may be doing a little work on one. What A Country has B and C grades for $13xx and that seems very high.

Feedback: 69 / 0 / 0
Have the ATN commercial versions which are very similar and work stunning. Two Aries (last of Aries line offered) Gen 2+ CGT or HPT whichever is highest resolution (4x and 6x) and two Night Arrow Gen 2+ WPT which have same light gathering and resolution of some early Gen 3s. They are fine units but use lithiums as ATN does not have large enough battery compartments and will pull so hard on alkalines they will bust. The Aries use CR 123s and power is no issue but the Night Arrows one holds two AAs but one only has single AA battery and got free because owner kept using cheap alkalines and would bust under the draw. Cleaned out battery compartment started running lithiums and it's been perfect ever since but have a spare battery handy as only have about four hours run time. Have remote battery pack for thermals and will run for a week.
Last edited: Jun 23, 2022

Feedback: 69 / 0 / 0
Have to find photo of actual unit but this is described as to basics of item and price given to me buy one of three of my sources get night vision. One is dealer and get first shot at all his demo units when they are replaced with new models and he sells the old demos for half wholesale or uses them to pay his labor bill for me repairing anything from night vision, radios to hinky AR uppers. Two others are guys that buy night vision as comes out, have limited number of rifles use it on and often sell me their cast offs. This particular unit did not work first few times owner tried to use it. Being a Night Arrow knew most likely culprit but he wouldn't listen and had not unboxed it till warranty expired.

I have scopes still sealed in original shrink wrap not opened purchased two years ago so not an uncommon thing for folks. Have fixed rifles owned for up to five years before taken to range and owner discovered would not run. Took me less than ten minutes to diagnose, have working 100%, offered to return to owner who said already replaced with Gen 3 didn't need it, offered cash and he refused.

In truck day received it in bag. Will find or take photo, currently mounted to CETME.

Found this in box, shows total owner paid and my cost was zip. Forty plus years of being handy and helpful in Mayberry has helped me score many deals could not keep swinging if had to buy things at retail.

If learn to repair stuff and be helpful then often some would rather give away flakey equipment that just needs proper attention. Only purchased one piece of night vision at normal pricing as Gen 3 PVS-14 just couldn't get one for free or even half price.

Edit, here it is after repair along with some other ATN product I was given to get out of the guys way. Sent the scopes off for service and nitrogen purge and now using on 10/22s. 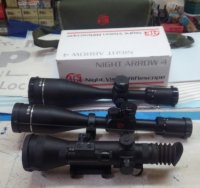