I may have asked before, but does anyone here shave with a straight razor?

It was quick because my homemade horsehide strop is in sad shape and didn't quite put the finishing touch I was after on the edge. Guess I finally wore her out!

To hone the edge, I used a Norton 4000/8000 waterstone followed by a Naniwa 12K waterstone then .5 micron diamond spray (DMT) on a super-nano cloth, glass-backed, magnetic plate. Sharpness is great, but needs a better strop. Ordered an Italian cordovan 3" wide strop today to remedy the issue. Tonight, I used LEA soap applied with an Edwin Jagger Best Badger brush. The silvertip is too fine and floppy for my beard and doesn't lather as well. I load the brush and create the lather on my face as opposed to using a shave mug or bowl to create the lather. I find that works better for my beard.

The shave still feels good with no irritation or redness (I rarely ever use an aftershave or astringent, just a room temp water rinse). I haven't shaved in a couple of weeks since I have to wear a mask at work anyway ( I know, I know..). I was starting to look pretty scroungy. My beard is so coarse that I plug up and ruin a cartridge in 2 shaves and they are ridiculously expensive. I have enough soap, razors, stones and other gear to use a straight the rest of my life and then hand them down to those that dare try a cutthroat.

Anyway, just curious to see if anyone else finds it rewarding to hone a razor and get a nice smooth shave by doing things the old fashioned way. I'm looking forward to reading some details and hopefully learn some tips and tricks!

No nicks or cuts, in case anyone is wondering. I've been doing this for a while now.

Feedback: 11 / 0 / 0
Nope. Tried it and could not get the technique down. Back to the double bladed safety razors for me.

The other important thing is to wear pants or heavy sweatpants as a minimum...

Feedback: 171 / 0 / 0
Everything I bought to try it, is still in my top dresser drawer. Unless I get that brave, I will wait until the SHTF.

Feedback: 279 / 0 / 0
No. Always wanted to try it but have zero idea how and the cost of failure is too great.
My face doesn't require much. I get by with Dollar Shave Club cartridges for $2 a pop and make them last a couple months. I had to stop my subscription because I'm stocked up until the year 2025. That don't count the previous pile of Harry's cartridges.
S

Feedback: 41 / 0 / 0
Have two different razors and do use them occasionally. Need to work on my sharpening skills for a better shave. Don't have a whetstone for the razors, just a two sided strop. Need to research it more I suppose.

Feedback: 1 / 0 / 0
I'm not a morning person, so it has never made sense to me to put a surgically sharp instrument to my throat first thing in the morning. For my own self preservation I have stuck to a Gillette Atra twin blade razor that I have had for at least 40+ years.

Feedback: 79 / 0 / 0
^^^
You might try different make blades if you haven't already. You can get sampler packs of different blades relatively cheap. Find out what works for you.
Also, a lot of them are made of carbon steel and corrode rather quickly resulting in a dull edge. They don't look tarnished, but the edge suffers first.
T

Social Influencer for the Feds 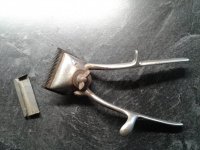 Feedback: 0 / 0 / 0
Inherited 3or4 of my grandfathers old straight razors and strop . Fortunately I never tried one for fear of carving off some cheek meat or slitting my own throat.

Feedback: 40 / 1 / 0
I used to , back in the 70's before I went into the Army.
Had to send it home as it was considered a weapon.
Used a safety razor while in the Army , retired and quit shaving except for every once in awhile.
I buy cheap single disposables .

Location
Up a freakin' Mountain!

Feedback: 20 / 0 / 0
Aids, killed the Barbers shops in the UK., and the Straight cut razor died then also - and made all the remaining Barbers keep their combs and cutlery, in Blue coloured antiseptic filled jars, and on display! Another fauci escapade!!!!! He ought be called Fuci! Supercuts everywhere now - basically unisex!!!!????
Anyway the last time I got a straight cut shave was with some awfully crap Schlick device, with the words 'Straight Cut' emblazoned on the handle - applied by some qunt hair snipper in Orlando - told him to stop after the first slice, punched him in the face, kicked him in the yarbals, and walked out singing Blake's 'Jerusalem'.
I think it might almost be a lost skill, the straight cut razor shave - certainly the UK Barber scene was killed off - they were a Man's Place. Shoot, thats where we all got to see girly mags like; the Mayfair and Penthouse collection! - outside of Mum's tits, it was the first time many a young nipper got to see a naked woman in glossy colour print, almost a right of passage for a young-un. Now. you've got a bunch of .... I mean a bundle of sticks, maneuvering with designer quad copter robot beard mowers, clippers and the such, that FFS., don't even come in a finely crafted Leather case with a brass zipper - something that exudes a pride in ones self, and is simply, nice. Now you pick one off the hook at Walgreens, and they all go blunt the first time you use them as wire strippers - namdagit! Seriously where did everything we once knew, go - & why?


NFADLR said:
Yep most of my razors are hetero.
Click to expand...

Feedback: 140 / 0 / 0
I'm getting up tight just thinking of a straight blade. I cut myself all to hell with a a double blade Atra back in my training days. I can't imagine what an improper pivot would do with a straight blade. Well, I can which is the reason I won't touch one!!

Feedback: 121 / 0 / 0
Since my beard and hair in general grow in about five or six different directions as well as swirls, I use the Harry’s five blade gizmo for about the best shave I can possibly get. And yes I do have several straight razors that I inherited from my grandfather and have successfully shaved myself on many occasions. I don’t want to do it every day though because of the drag that is a part of process as you slide through your hair. For the most part, before I went to the Harry’s five blade gizmo about four years ago, I used your basic Gillette clamshell post handle razor that’s been around since before WW I. Ironically, there aren’t any American or, even British companies that make that type of razor blade anymore. The ones I buy come from the ROC (Taiwan)

I like modern stuff including the newer style of razor blades and the Harry’s for me is just the best. I still have to shave twice, one in each direction but it only takes going in two directions to get a nice smooth shave overall. Before that, I lather up twice and go about 20 different directions, lol…
A

Feedback: 5 / 1 / 0
Day to day it’s a double edge safety razor. I buy every adjustable antique I can find but I have a couple of straight edges that take a double edge broken in half. When I have time the process of working up a lather and carefully shaving with a straight edge is very relaxing and rewarding.
You must log in or register to reply here.
Share:
Facebook Email Link
Top