Feedback: 0 / 0 / 0
I have a fn fal heavy barrel and was wondering if it is a sear cut or not. Any information would be appreciated thank you for your time.

If it was you would be instructed where to tune in for further updates.

Feedback: 97 / 0 / 0
If it was sear cut (completely sear cut) it would be contraband and be a federal felony to possess without a tax stamp.


Post pics of the upper in the area where the sear goes if you truly want to know if it fully sear cut or only somewhat sear cut.

If it is there is a pathway where the sear would be placed to operate in auto.
Last edited: Jan 16, 2021

NFADLR said:
If it was sear cut (completely sear cut) it would be contraband and be a federal felony to possess without a tax stamp.
Click to expand...

A good percentage of Steyr Import rifles are sear cut, with a semi auto only trigger plunger, selector and bolt carrier.

It's a big nothing burger.

Unless, like me, you are a licensed NFA manufacturer and register a sear!
Last edited by a moderator: Jan 16, 2021 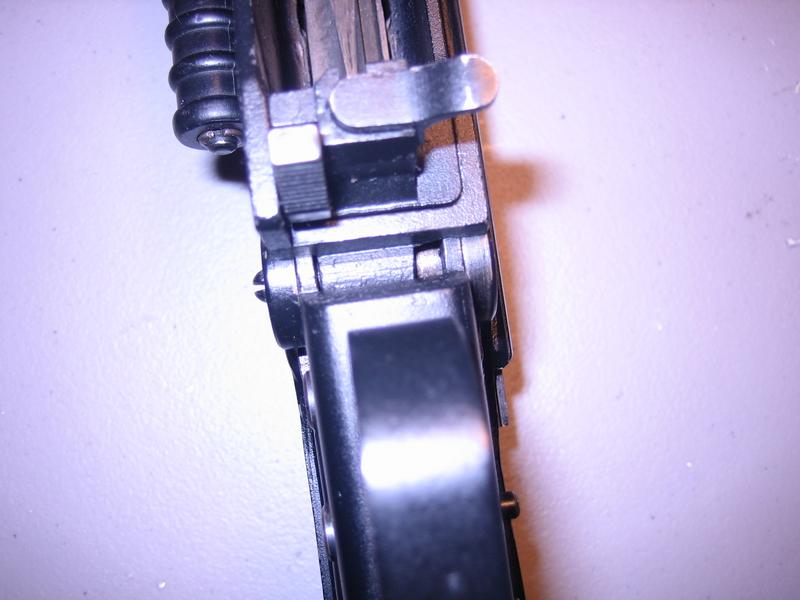 Feedback: 0 / 0 / 0
I appreciate everybody’s input I guess the bigger question is what do you think it’s worth

Feedback: 19 / 0 / 0
Judging by the wear behind the ejection port it’s seen considerable use- realistically I’d say somewhere in the $3500 range, maybe more depending on how badly someone wants it.

Feedback: 165 / 0 / 0
It appears to be in very good condition but not excellent. Need more photos for a better appraisal and as VALMET stated there is heavy wear behind the ejection port and also wear on the raised areas like the trigger and hammer pins.
Overall it is a very nice heavy barrel which in likely pre-GSI.
$3500 is a good sale price.
S

Feedback: 9 / 0 / 0
Now you know this is not true, or at least you should know.
>> If it was sear cut (completely sear cut) it would be contraband and be a federal felony to possess without a tax stamp<<

sharkey said:
Now you know this is not true, or at least you should know.
>> If it was sear cut (completely sear cut) it would be contraband and be a federal felony to possess without a tax stamp<<
Click to expand...

Are you aware some the 1970s Steyr imported standard and heavy barrel FALs has sear cuts and provided amnesty by BATF? To my knowledge, there was no Steyr list as with the G series list and the sear cut Steyrs were random in the lot of imports and could not be distinguished by the serial numbers. I think this heavy barrel is one of the Steyr imports since the serial number is in the same range of other imports in the era.

Feedback: 353 / 0 / 0
Are you aware some of the 1980s Steyr imported standard and heavy barrel FALs have sear cuts? Of course you are because I already said so several posts ago. I've owned several.

I think this heavy barrel is one of the Steyr imports - because it says so on the side of the receiver.

Feedback: 165 / 0 / 0
Jledwich88 I have some additional information on your 50.42.
Steyr imported approximately 2000 FAL from 1974-1977. The models included 50.00 and 50.42. It is not clear whether the Steyr 50.63 folding stock FAL was included in that order or if it was imported as a separate order in the 1970s.
The 1970s had some troublesome economic times with the Arab oil embargo with gasoline reaching $1 or more and shortages. US inflation was ramped and was often called runaway inflation. Needless to say money was tight. paychecks were the same and those Steyr FALs were selling anywhere for $1200-$2000. There were several vendors selling the Steyr FALs in Shot Gun News as far as 1985. They were slow moving to say the least.
GSI seemingly struck a deal with Steyr in early 1981 to sale some of all remaining FAL's off their hands. This will account for the double stamping of: Steyr, Secaucus, NY and GSI Birmingham, AL. on some receivers. So now we have GSI and several other retail outlets selling the Steyr FALs at the same time. It didn't take long for the FALs to drop to about $900 to move the inventory.
GSI did import additional FALs (all models) from FN Herstal and ended up selling them on clearance for $799 each dealer price in 1988.

Your 50.42 with the sear cut was less than 25 imported and considered rare. Perhaps my assessment was on the low side considering this information I found in research and my own experience in buying and selling firearms back in that timeframe.
You may want to drop the trip (tail) of a safety sear into the cut to determine if it is fully cut. No matter you seem to have something special.
Last edited: Jan 22, 2021
J

Feedback: 0 / 0 / 0
Dakto, thank you very much for the info and help with my fal I really appreciate it. I don’t think I am going to sell it, I never thought I’d own a Belgium fal but I am glad I got info about it. Thanks again my man
F