Decision made on AR set up

Feedback: 69 / 0 / 0
Have offset red dots on over a dozen rifles and some form of red dot on almost every scoped rifle own including large turn bolt hunting rifles. Deer jumps up twenty yards away and moving as walking to stand or blind trying to find it in a minimum 8x power scope reticle. Missed ability to take a shot at biggest deer ever saw that had a fifteen to twenty second window of opportunity as it quartered away but by time found it in scope could not be sure if the blob of hair in scope was its rear, guts shot, neck or squirrel in nearby tree. Bought two dozen entry level dot sights to put on every big scoped rifle that goes in the field.

With my LPVO scopes on light fighters or MBRs the dots give a fast option for CQB or backup if scope happened to die. Can run my 1-6x, 1-8x or 1-10x LPVOs at higher power for distant targets but if suddenly surprised by 25 foot popper just put dot on target and fire. Have over a dozen AR15s with various scopes in Burris PEPR mounts running Fastfire 2 low profile dot sights. All of my night vision rifles have red dots in case happen to be closest to a 6x Starlight scopped rifle when boogeyman kicks down door.
C

Feedback: 0 / 0 / 0
Getting another build set up. I saw Midway had the Bushmaster QRC upper on sale for $364 +shipping and figured I would buy a second one.

I liked the one I built for my daughter so much that I want one too.

The pencil barrel is so light and it's like most guns, carried a lot but not shot enough.

Feedback: 19 / 0 / 0
I've been running a offset red dot on my AR's for a few years now. The transition from far to close is very fast & can be quite accurate.
I even run an offset on my bolt gun. 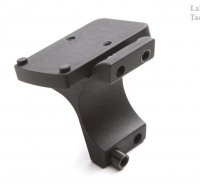 Feedback: 0 / 0 / 0
I just think that set up is way better than a red dot with a magnifier. Watched a lot of videos and it makes good sense. No swinging the magnifier back and forth taking your hand out of shooting position. A scope reticle with bullet drop and a short twist to a red dot.

Feedback: 69 / 0 / 0
What size dot? Prefer 2 MOA and crank brightness for CQB but most have are 4 MOA and run 6 MOA on 1911 race guns but that's different game. Had to go to Atlanta yesterday and today, two rifles in rear locks of wife's truck. One 11.5" binary SBR with Vortex Strikefire 4 MOA dot set for green and suppressor attached. Other 14.7" with pinned suppressor adapter, suppressor attached, Vortex Viper PST 1-6x with Burris Fastfire 2 in PEPR mount. 60 round stick magazine in each loaded 55 rounds. Bandoleer of spare mags but if business is not done before the run 110 rounds through the two guns odds are your in a losing or already lost battle.

If you don't add a dot to your glass you may have lost the fight fiddling with scope but if something is upsetting me past 150 yards may not be able to hit it without some magnification helping out.

Also like nailing my dots on left side as equally left eye dominant & brass less likely to whack it repeatedly.

Hard to see but dot is nailed to left side of this N.V. scope.

What good is an HBAR if can't go crazy on a CQB situation?

Even the 22 Nosler varmint killer gets a dot in case zombies interrupt my ground hog killing party.

Better have an FAL in the spread...

Feedback: 69 / 0 / 0
Have five 3x magnifiers in swinging mounts. Have two Eotech 3x which were both gifted to me as owner decided to swap one rifle to Elcan Specter 1x-4x which would own one myself but for it's cost. $2,000 for a 4x maximum magnification optic is strong for my wallet but is a joy to shoot someone else's. May be owning the Specter soon as a new optic is being considered to replace it.

Other Eotech came from person who just hated the entire dot concept after 60+ years of open sights or scopes. Biggest issue was discovered his astigmatism and dots didn't work together. Why I tell everyone to test drive a dot before you buy if never used one. I have issues with a few but learned if use lowest necessary brightness issue goes away or is manageable based on brand/design.

Have three SIG Juliet 3s from a power buy where ordered six SIG Romeo 5s all together. All new in sealed boxes as seller was dropping SIG line from their inventory. The 2 MOA dots on Romeo 5s are perfect with 3x Juliet's. Have tried swing ups with 4 MOA dots and do not like at all. Had these not been less than wholesale would not have bought the magnifiers but seller made deal to attractive to pass up.

Have six spare FN 14.7" hammer forged 5.56 Wylde barrels purchased from Palmetto pushing a decade ago of which built two and parked the rest. Still have plenty of the $19 magnesium lowers and $19 Colt Competition Target triggers, free take off OEM stocks with buffers won't have but about $200 each in them. Glad I bought parts by the crate when market was at bottom so when mood strikes only cost in putting together another AR is optics.

Of course that is a curse because want to assemble all the parts which then causes a hunt for glass. Am a bit of a snob when it comes to glass thus a pile of parts locker parts become a need for $400 in glass/mount plus a dot. Even have a dot on my 1,000 and 1,200+ yard rifles and found $19 dots seem to work for "emergency use only" applications on big guns but light fighters and MBRs need $99 to $299 micro dots.
C

Feedback: 0 / 0 / 0
Went through midway offerings for mounts and I am not sure what the best red dot mount is. I try to compare what Jerry is using to what is offered and looking for something I hope fits.

I have a bunch in my box of odd rail adapters from finding deals at CDNN (have 45° offset picatinny rail mount $6.99), Centerfire, Palmetto, etc and buying multiples. Like the Vortex 45° mount with Vortex Venom 3 MOA which should run about $250 if shop sales. The lifetime warranty makes the Vortex more attractive if using on a rifle plan to hammer with.
C

Feedback: 0 / 0 / 0
I am finding that as I turn the gun that I need a mount pretty close to the scope. The ones you showed me are what I need.