Feedback: 12 / 0 / 0
Interesting read. Lucky shot placement during a situation with a lot of stress: 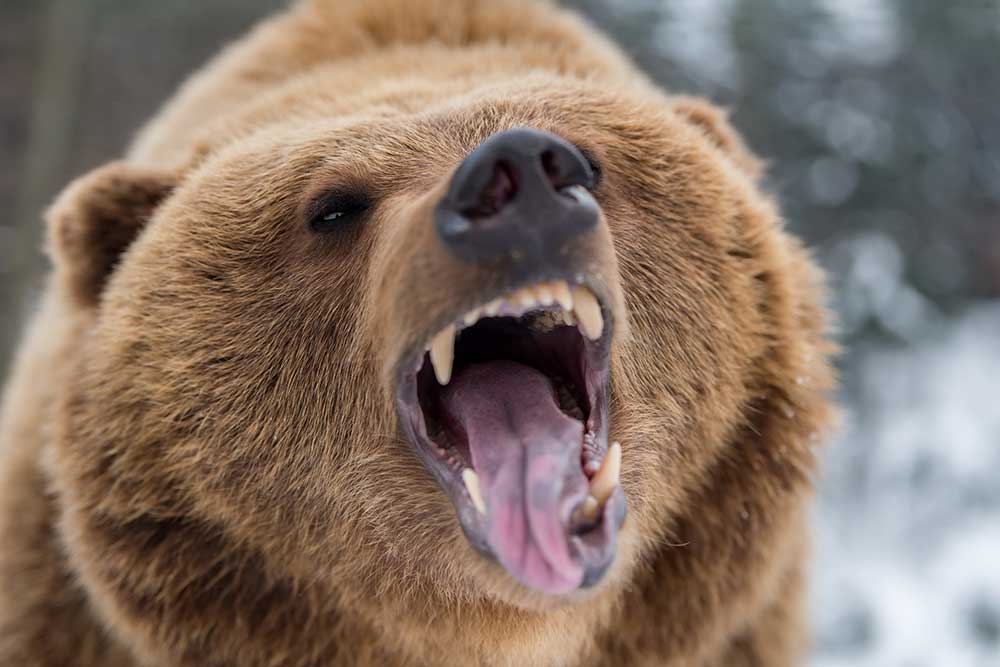 During a grizzly bear attack on archery hunters in September of 2011, one hunter used a .38 Special revolver to stop the attack.


On September 13, 2011, two bowhunters were hunting for elk in a wild part of Wyoming, on the boundary of the Shoshone National Forest and the Bridger Teton National Forest. The location was on the Continental Divide between the Salt Creek and the South Fork of the Fish Creek drainages, about an hour north of DuNoir Junction, southwest of Dubois, Wyoming, near the boundary of Fremont County and Sublette County, at an elevation of about 9442 feet, according to the map contour lines. It is in the middle of the west edge of Wyoming.

The weather was cool in the morning and warm and dry in the afternoon. Temperatures varied from 35 to 70 degrees F in nearby Big Piney-Mableton at about 6,000-foot elevation.


Two hunters were involved. Their identity is deleted in the FOIA document. They will be referred to as Hunter One and Hunter Two. Hunter One had a holstered .38 Special revolver as well as his archery equipment.


At about 10:00 a.m., the two hunters were crossing a large area of downed timber, with numerous blowdowns. This type of terrain is very difficult to traverse, because you are constantly climbing up, over, and down large tree trunks. The pictures give an indication of the complexity. It is not a walk in the park.


Hunter One was “about to cross a big piece of downed timber” when he saw a large bear jump up and toward him. He ran up a downed tree, and the bear was “spooked” and ran north into the timber. Hunter One waited until the bear was out of sight; then he used his cow call to communicate with Hunter Two, who was 30-50 yards away. 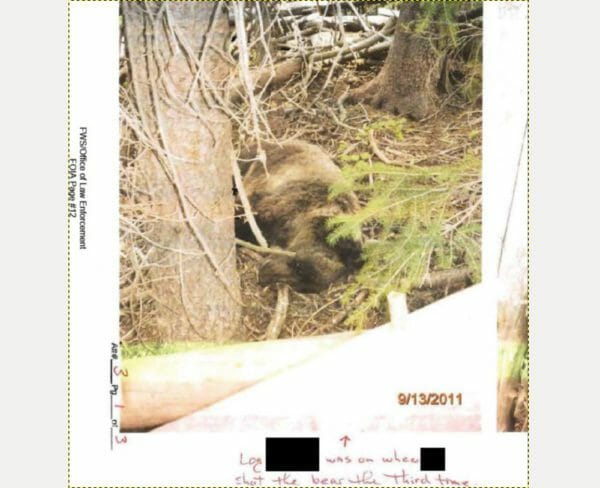 Image from Hunter One’s perspective at end of attack
Hunter Two came closer when he saw Hunter One up on the downed tree trunk. They communicated and decided to leave the area because of the danger of the grizzly bear.


The two hunters had traversed about 300 yards upslope to return to their vehicle. They heard a crash. Believing it might be an elk, they saw two bears running at them. Hunter One was climbing another downed tree trunk when he saw the larger bear change direction and attack Hunter Two.


Hunter Two had seen Hunter One darting up the downed timber, and the bears coming at them. Hunter Two ran to climb a downed tree near Hunter One, tossing his bow to facilitate his ascent. Hunter Two slipped and landed on his back, looking up to see the larger bear looming over him. He brought up his foot to kick at the bear, and the bear grabbed his right ankle. He yelled at Hunter One to shoot the bear!


At this point, Hunter One had drawn his .38 revolver. He fired two shots as the bear attacked Hunter two. The bear disengaged from Hunter Two, fell down, and started to come up toward Hunter One. Hunter One fired another shot at the bear, and it went down for good. Hunter One reported all shots were fired from six feet or less. 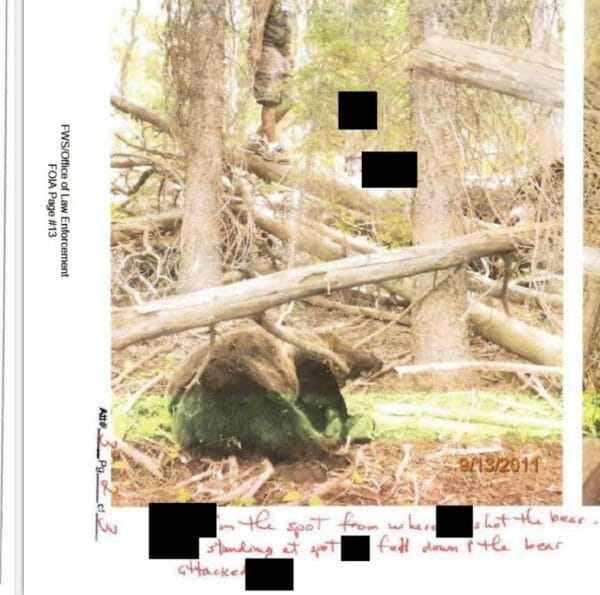 The photographer appears to be at the position of Hunter Two during the attack.
The entire sequence of shots probably took less than five seconds.


Hunter Two got up and checked himself. Because of his heavy leather boot, and the quick action of Hunter One, the bear’s teeth had only punctured his skin at one spot. After checking Hunter Two, Hunter One reloaded his revolver. 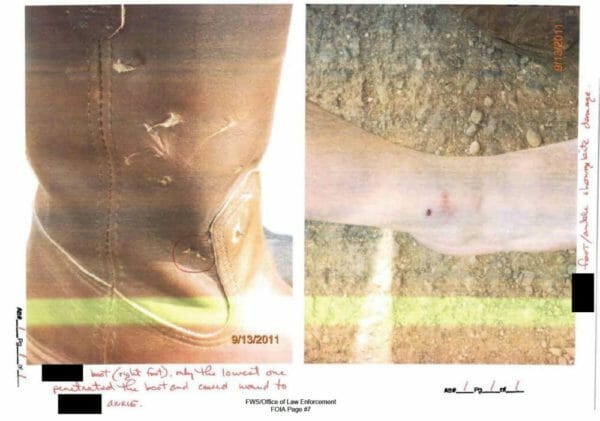 The two hunters finished returning to their truck. Once there, they hooked up their travel trailer and drove to Dubois, where they contacted Wyoming Fish and Game. Wyoming Fish and Game received the information and were able to meet with the hunters at DuNoir Junction about three p.m. From there they went to the shooting site and did a field necropsy on the bear.


The Wyoming F&G personnel recovered three fired .38 Special cases at the site. They recovered three .38 caliber bullets. None had exited the bear. From the picture, they appear to be 150-160 grain jacketed bullets. Two of the bullets were relatively undamaged. 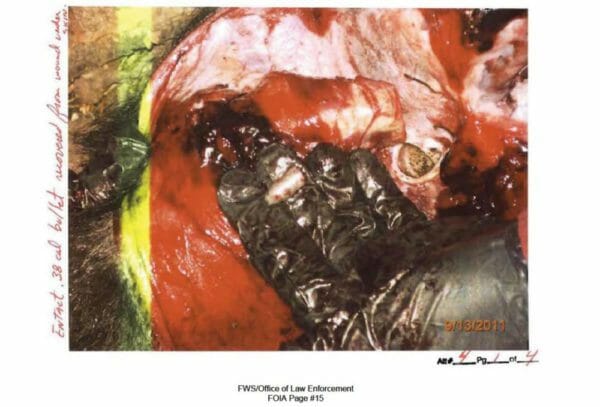 One bullet was significantly deformed, apparently from hitting the bear’s spine. This was probably the killing shot. All bullets had entered the bear from the front half. 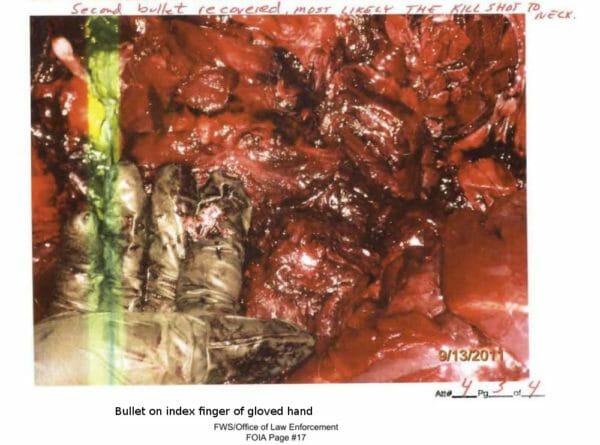 Hunter One said he was “shaking so bad” and “was so scared”. He was not shaking or scared bad enough to keep from scoring three solid hits with three shots, killing the attacking bear and stopping the attack on Hunter Two. The shaking reaction is a common occurrence following an adrenaline dump when involved in a deadly fight.


The investigators looked for a yearling cub; they did not see one, but all reported hearing a bear “woof” and “pop” its jaws.


The hunters’ verbal statements, the physical evidence, and their written statements were all consistent.


The bear was tattooed with the number 497. It had been trapped as part of management action in 2005, and again in 2008, for depredating on cattle, not far from where the attack and defensive shooting took place.


On January 9, 2012, the United States Attorney for the District of Wyoming determined the case was clearly self defense, and declined to prosecute for the illegal take of a grizzly bear.

Feedback: 19 / 0 / 0
Bullets do strange things- a fact that sometimes seems lost on many ballistic-gel YouTubers (not that I recommend .38 Spl as a bear cartridge).

Feedback: 47 / 0 / 0
It's all about shot placement and straight line penetration. Lucky he had FMJs in there and was able to get so close

"Remember the time when that bear bit my ankle?"
"It was back in twenty and eleven, as I recall..."

Feedback: 10 / 0 / 0
Surprising. I'd have thought that a .38 Spl would have been useful only as a means of ending your own suffering, as the bear munched on you. I'm NOT one of the 'Which handgun should I use for bear defense?' guys. I firmly believe in carrying a rifle or shotgun for such purposes, if at all possible, and the largest caliber handgun that I can consistently score rapid multiple hits with. It just goes to show that strange things frequently happen when bullets meet living flesh. 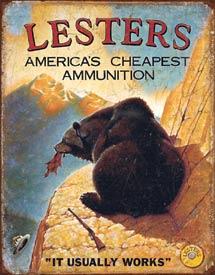 VALMET said:
Bullets do strange things- a fact that sometimes seems lost on many ballistic-gel YouTubers (not that I recommend .38 Spl as a bear cartridge).
Click to expand...

Feedback: 20 / 0 / 0
So where do you aim at 6 feet, to kill a charging bear. I have read that Bears have been killed with a single 22lr shot, from a pistol at similar distances - yes maybe a Black bear and not a grizzly but still! I guess you never know when a hefty 50 s&w will come in handy - oh it's just too heavy!!!!

Trypcil said:
So where do you aim at 6 feet, to kill a charging bear. I have read that Bears have been killed with a single 22lr shot, from a pistol at similar distances - yes maybe a Black bear and not a grizzly but still! I guess you never know when a hefty 50 s&w will come in handy - oh it's just too heavy!!!!
Click to expand...

Seem to remember something about an Indian woman killing the largest Grizzly ever with a Stevens single shot, Favorite maybe?
She was just trying to drive it out of her garden.

No clue where I read that nowadays of course.

Trypcil said:
So where do you aim at 6 feet, to kill a charging bear.
Click to expand...

You just hope you hit it and it's deterred enough to go away. With a .38 spc there's no GOOD place TO aim. Damn lucky!

Don't Tread On Me!

Those "Big Bore" Air Rifles that fire a 147gr. Lead Pellet at ~850fps that are so deadly on Big Game.....yea, that's what a .38 Special is.
It's as much about shot placement as it is luck of the draw.
Few years back there was a News Story of a guy that shot and killed a Bear in his back yard with a .22LR so it can be done.

Remember that video where a bow hunter gets chewed on when he hesitates ?


Jaxxas said:
At 6 feet I think I'd have dumped all 6 rounds into the bear, hopefully before dumping my load in my shorts.....
Click to expand...

Feedback: 0 / 0 / 0
The scull of a Brown is an eye opener if you ever get a chance to see one. Very small with very thick bone structure shaped like slope armor. I would hate to have to try and stop a charge with anything smaller than a 45 70. Spent 5 years in Alaska and never saw a brown up close...just a lot of tracks and a fresh moose calf kill once.

Feedback: 19 / 0 / 0
Found the pic. Single-shot .22LR. Apparently was one of the Canadian Industries “Whizz-Bang” loads. 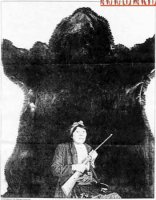 Feedback: 9 / 0 / 0
In a situation where a bear is charging down on you, I submit that any gun is better than no gun; 38spl or otherwise.
You must log in or register to reply here.
Share:
Facebook Email Link
Top